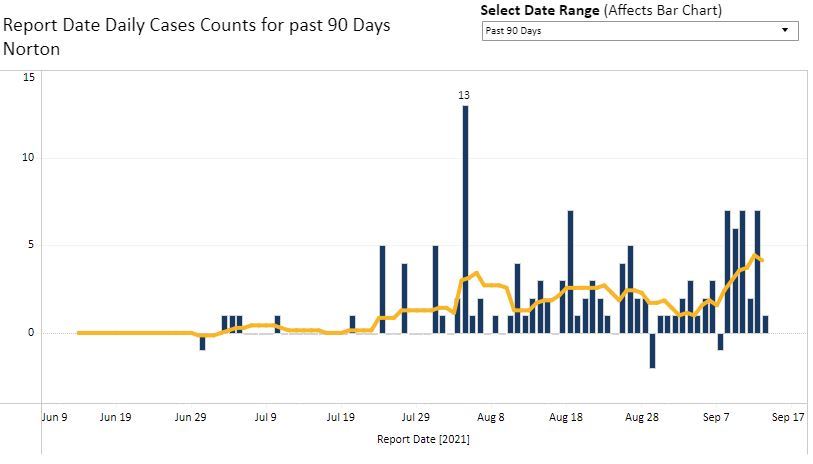 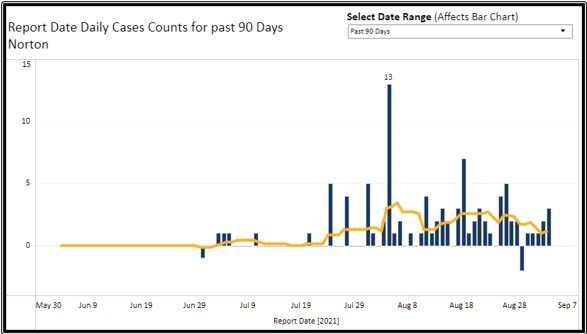 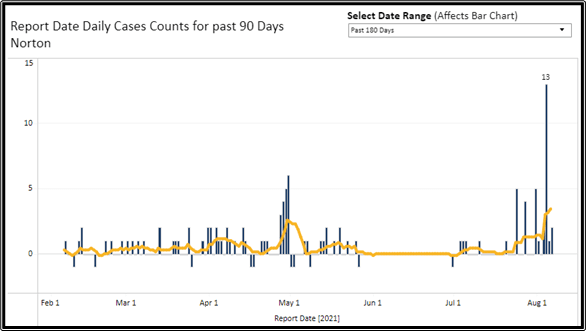 Please see below for closures of city and community facilities due to the COVID-19 pandemic.

Please see below for details about City of Norton cancellations and postponements, including meetings, events, and other activities, due to COVID-19.

There are currently no public meeting cancellations due to COVID-19. Please check back regularly for updates to this list.

The following is a list of city events that have been canceled due to the COVID-19 pandemic. Please check back regularly for updates to this list.

Please see below for changes to city services due to the COVID-19 pandemic.

The below list offers contact information for local, regional, and state agencies that can provide assistance for health and human service needs.

Please see this list of Norton restaurants for details on operational changes and delivery options due to COVID-19. Don’t see your restaurant? Need your listing updated? Please send restaurant entries and updates to Katie Dunn, katied@nortonva.org.

Check back for information regarding scams related to COVID-19 circulating in the area.

You Can Help Stop The Spread!

Want to know how you an help stop the spread of COVID-19? See below for some helpful links.

We’re featuring stories of residents giving back to their communities during COVID-19. Have a story you’d like to suggest? Contact Katie Dunn at katied@nortonva.org. 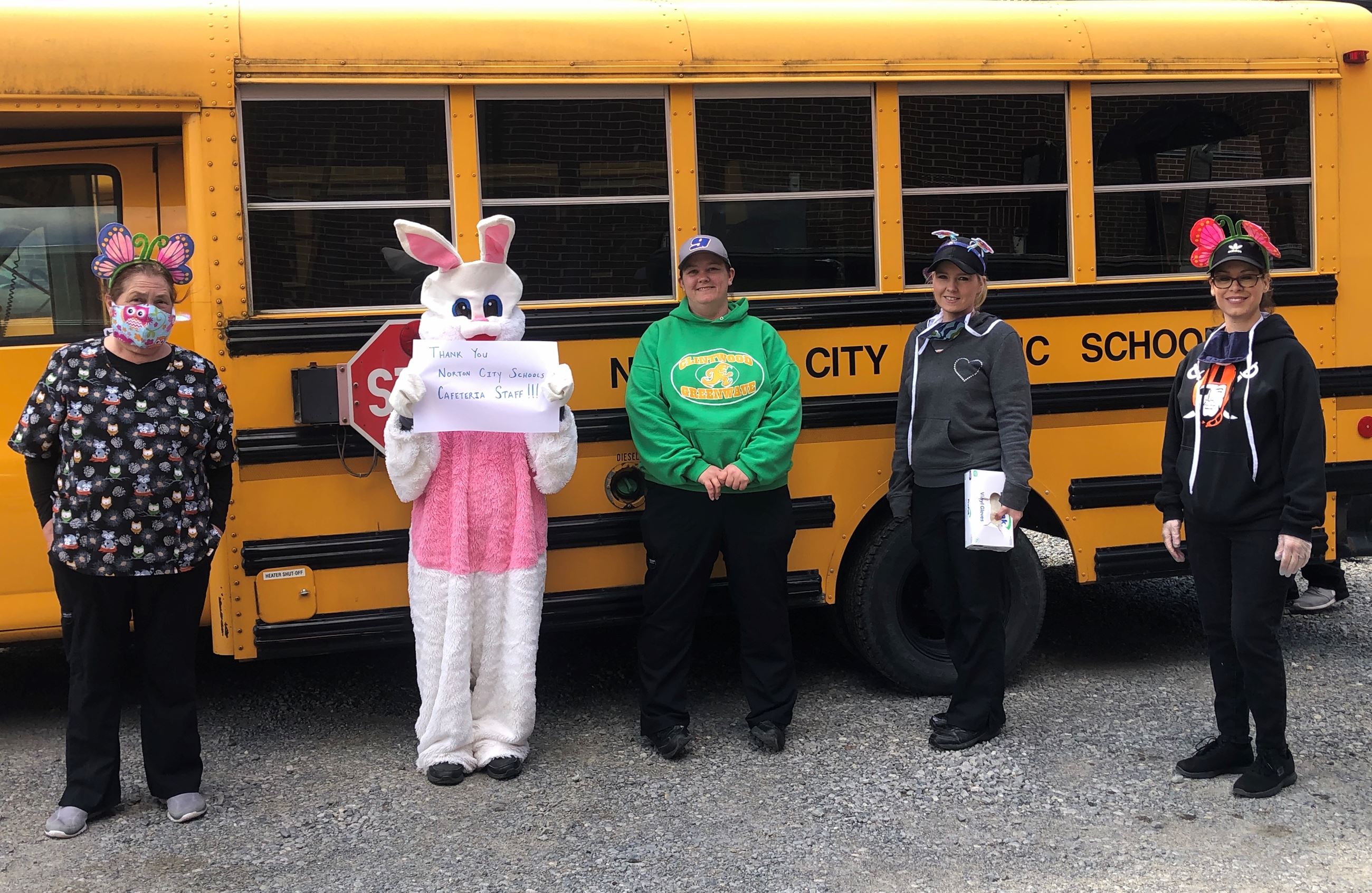 As Easter celebrations and community egg hunts were canceled or moved online due to the COVID-19 pandemic, Norton City Schools’ employees wanted to bring some Easter cheer to students.

“I was talking last week with our counselors about how we could make Easter special for our students without being able to have Easter egg hunts and with the social distancing and 10 or less in a gathering guidelines,” noted Gina Wohlford, Norton City Schools’ superintendent. School counselors Melissa Cook and Stephanie Gross hatched the idea for the Good Friday surprise, she explained.

“We emailed the teachers about the idea and it took off,” said Wohlford. “Not only teachers, but many community and business partners heard about it and were quick to respond with donations and volunteer efforts.”

The school system began its meal distribution program in March after Gov. Ralph Northam announced all schools across the Commonwealth would close in an effort to help slow the spread of COVID-19. Meal deliveries began March 16 and have continued every weekday since then, serving between 250 and 275 students.

Wohlford said the school system is thankful for the teachers, businesses, and community organizations that helped organize the Easter basket deliveries. She thanked CVS Pharmacy, First Church of God, Freedom of Worship, Norton Parks and Recreation Department, Wells Fargo, and the City of Norton for providing donations for the baskets, as well as the many volunteers that assisted in filling and delivering them.

Wohlford also gave a shout-out to the school system’s cafeteria workers and bus drivers for “their continued dedication to the students and to Norton City Schools,” as well as to school counselors Gross and Cook for organizing “this special blessing and for inviting the Easter Bunny to the City of Norton.”

The school system continues to provide daily meal deliveries for all children ages 2-18, noted Wohlford. The deliveries are made on the city’s bus routes and via a pick-up option at John I. Burton High School. Wohlford also noted that on Fridays, the school division is able to provide additional weekend food for students through a program with United Way of Southwest Virginia called Backpacks Unite that is also supported by Wells Fargo.

Wohlford said donations for this program are welcome. “We may have a need this upcoming Friday for our Backpacks Unite as Wells Fargo is currently closed,” she noted. “We still plan to deliver additional weekend non-perishable food through donations and support within the community. We can take donations at the School Board Office or at John I. Burton Cafeteria.” 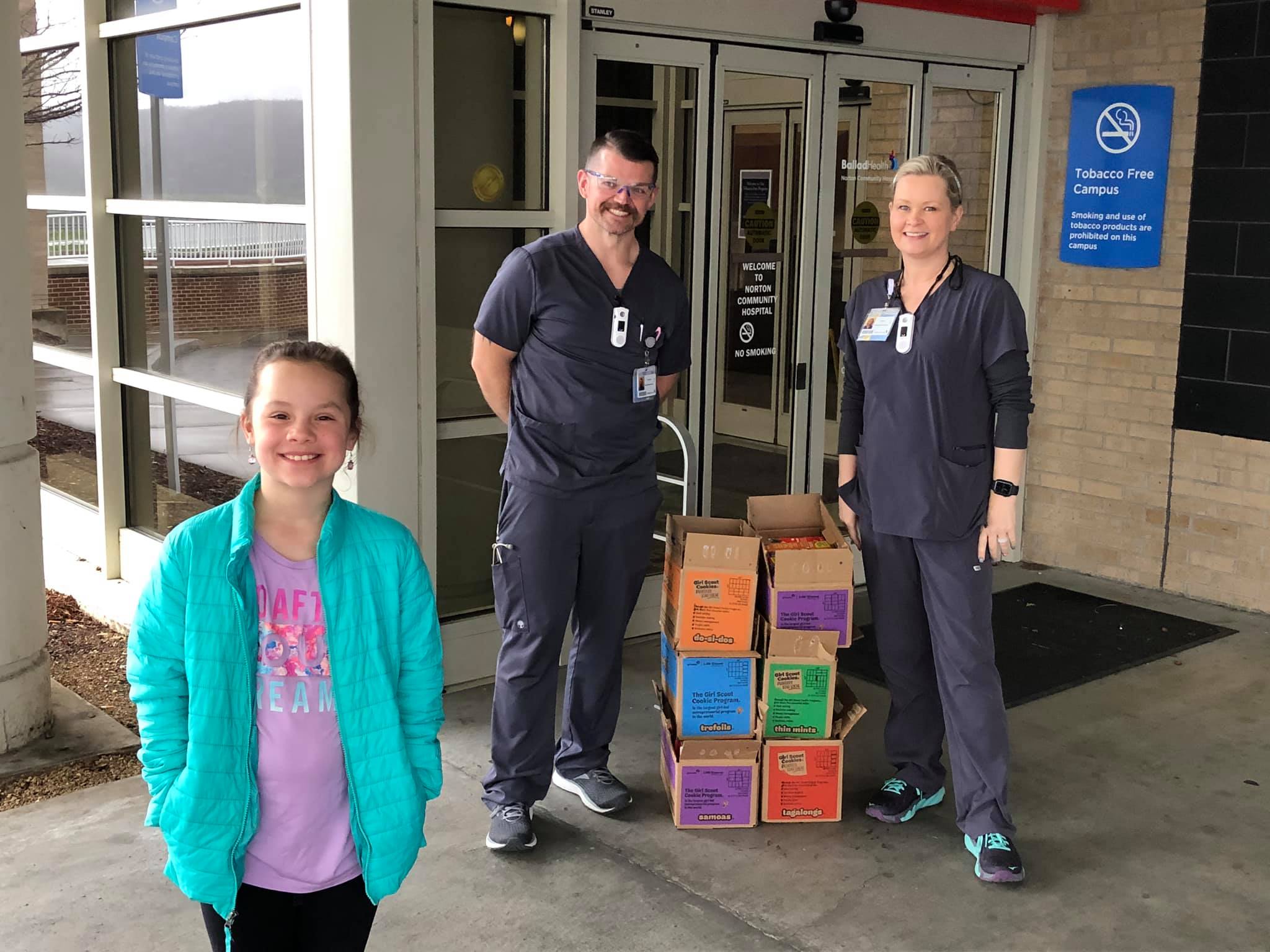 WISE - When 180 boxes of Girl Scout cookies arrived at 9-year-old Lindsay Stallard’s house in early March, she and her fellow Troop 389 members had every intention of selling them door-to-door and outside local storefronts.

That all changed when the COVID-19 pandemic prompted state and federal leaders to recommend limiting social interactions in order to help stem the spread of the virus.

Unsure of how to offload 15 cases of the popular seasonal cookies, Lindsay’s father, Dave Stallard, said an idea emerged to start a community fundraiser that would pay for the cookies to be donated to area healthcare professionals.

The family announced the campaign on social media on March 19. The response was swift. Within five hours, Stallard posted on Facebook that all boxes had been purchased and would soon be delivered to Wise County health organizations.

The cookies were delivered to two doctor’s offices in Norton, Norton Community Hospital, and Heritage Hall in Big Stone Gap. Lindsay said the inspiration for delivering the sweet treats to healthcare professionals stemmed from them being on the frontlines of the pandemic. “We picked the hospitals because the nurses and doctors are staying there and taking care of the patients,” she said. She added,“they were all excited” to receive the cookies.

Asked how it felt to help boost the morale of local healthcare workers by bringing them cookies, Lindsay grinned and said, “It made me feel good.”

Dave Stallard said six or seven people purchased the cookies through the fundraiser. Four cases were even purchased for Wise County healthcare workers by Mary Immaculate Hospital in Newport News. “A good friend of mine saw my initial post and bought a case,” he explained. “Three more of her hospital friends did the same.”

Stallard noted that the Wise County campaign has since inspired a similar effort in Northern Virginia. His friend from Mary Immaculate Hospital told her sister, who is also involved in girl scouts, about the Wise County campaign. Stallard said this inspired her sister to start a similar effort in her own community in Northern Virginia.

If you have story ideas that feature local Norton community members or groups giving back during the COVID-19 pandemic, we’d love to hear them. Please send ideas to Katie Dunn, katied@nortonva.org.