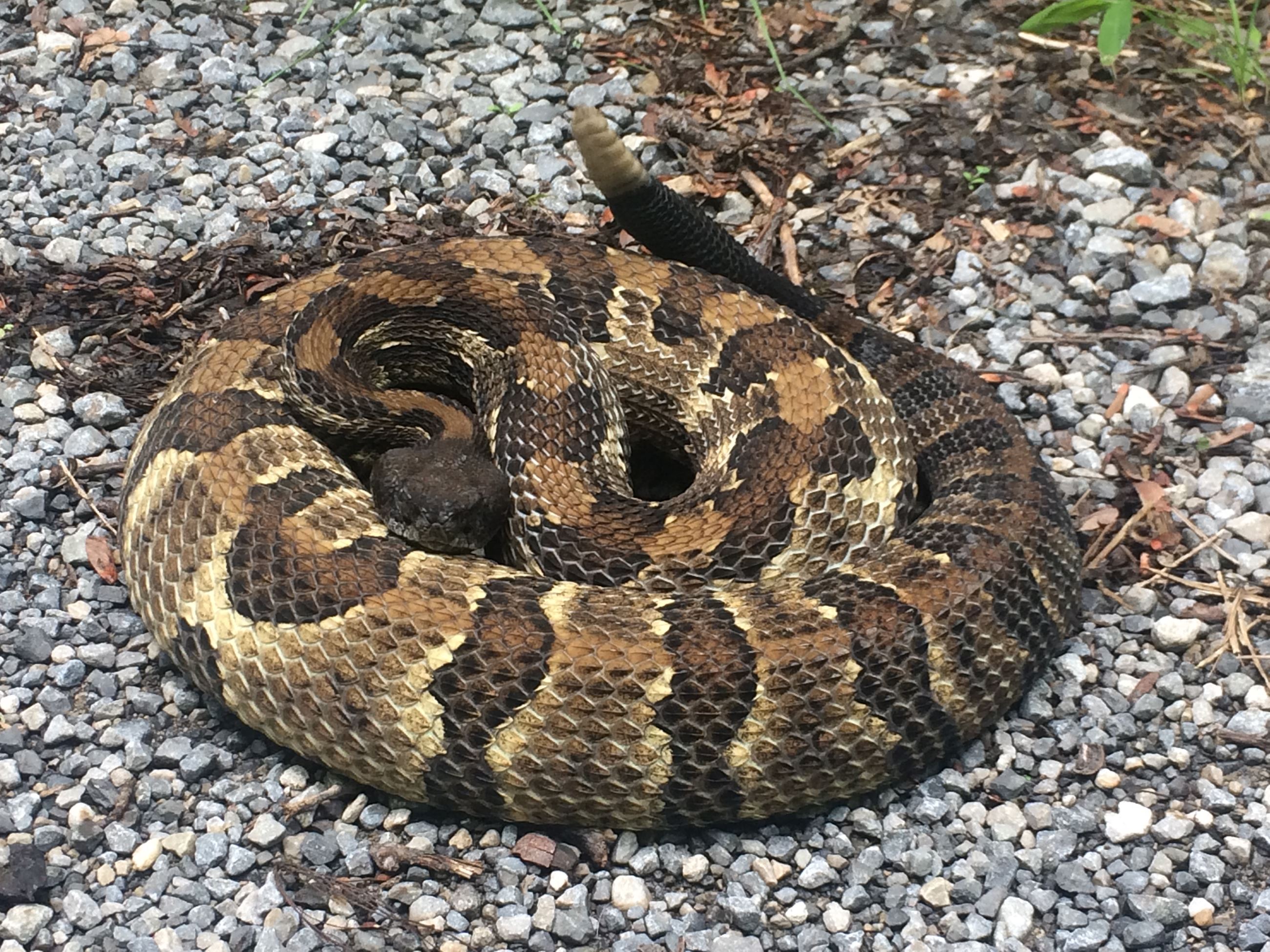 Information provided by the Virginia Department of Game and Inland Fisheries.

“SNAKE!”  The mere mention of the word evokes an emotional response. It may be wonder, exhilaration, shock, or even fear. Many of these responses occur because snakes appear and behave unlike any other animal we know. Others are deeply rooted in folktales and myths that give snakes extraordinary powers and abilities. Regardless of their source, misconceptions about snakes have made them among the most persecuted of all animals. A common reaction to snakes is “the only good snake, is a dead snake,” but nothing could be further from the truth.

How many species of snakes live in Virginia?

There are 32 species of snake in Virginia, but only three are venomous (Cottonmouth, Copperhead and Timber Rattlesnake). Of these, only the Copperhead and Timber Rattlesnake occur in Southwest Virginia. Cottonmouths (aka water-moccasins) are primarily found in southeastern Virginia. Some of the more commonly encountered harmless (nonvenomous) snakes in Southwest Virginia include the Eastern Milksnake, Northern Ring-necked Snake, Eastern Ratsnake (aka Blacksnake), Black Racer, and Northern Watersnake, which is often misidentified as a Cottonmouth.

How do snakes benefit humans?

Snakes play a critical role in our ecosystems eating a wide variety of prey items. As many species of snake are predators of rodents, they are also highly beneficial to humans. A single Timber Rattlesnake may indirectly remove 2,000-2,500 ticks annually from the wild through the rodents it eats, which is important when considering the ever increasing prevalence of Lyme's disease and other tick related diseases. And with U.S. farmers losing millions of dollars every year from crop damage caused by rodents, snakes are invaluable in controlling these types of pests. Some nonvenomous snakes (Eastern Milksnakes, Black Kingsnakes and Black Racers) actually prey on other snakes, including venomous species. But with all of these benefits, the persecution and killing of snakes continues and is mostly driven by a misunderstanding of their behavior and misinformed beliefs.

FACT: Snakes do not chase people. At top speed, Virginia’s fastest snake is the harmless Black Racer and it can only crawl at about 4 mph, which is the pace of a very brisk walk. If you happen to be standing in the path of its escape route, it may appear that it is “attacking” or “chasing” you.

FICTION: Rattlesnakes and Copperheads become more aggressive and territorial during the mating season. These species are relatively docile and will only strike when provoked.

FACT: Taking matters into your own hands puts you at greater risk of being bitten. Many snake bites can be avoided by following a very simple rule: Just Leave Them Alone. Snakes really don’t have any interest in you and if left alone will move on their way.

FICTION: Copperhead populations are increasing. This story seems to circulate every summer, but there is no scientific evidence to support this claim.

FACT: From mid-July to early September sees an increase in rattlesnake movement as this is the mating season and males are on the move searching for females. It’s during this period when most human-rattlesnake encounters occur.

FICTION: Rattlesnakes are interbreeding with blacksnakes and producing rattle-less black rattlesnakes. This is completely false. These species are genetically incompatible.

FACT: Over the past 30 years in Virginia, only 15 deaths have been attributed to venomous snake bite and many of these victims did not seek medical attention. More people are killed and/or injured by horses and dogs than snakes in the United States every year.

FICTION: Baby snake venom is more potent than the adults. Only certain components of venom and only in certain species, none of which occur in Virginia. In general, adults are more dangerous, because they can deliver a much larger dose.

FACT: Keeping your yard mowed and free of brush and other debris piles will deter snakes from inhabiting your yard. Bird feeders also attract snakes. Birdseed dropped to the ground attracts rodents, which in turn attracts snakes.

FICTION: The Virginia Department of Game and Inland Fisheries is dropping bags of rattlesnakes from helicopters into the mountains of Southwest Virginia. This is completely false and a folktale that is repeated in just about every state where rattlesnakes occur.

To learn more about snakes and related issues, you may obtain a copy of A Guide to the Snakes and Lizards of Virginia at www.shopdgif.com. Another good resource is the Virginia Herpetological Society's website.